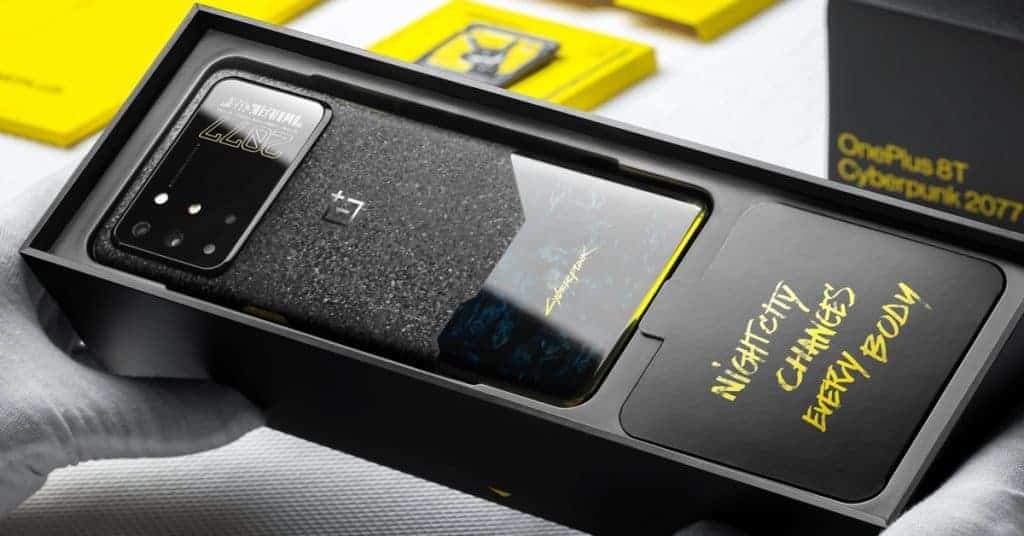 In October, the Chinese company launched its latest flagship dubbed OnePlus 8T, with a long-life battery and quad cameras. And now, this brand recently announced the release of a special version under the name OnePlus 8T Cyberpunk 2077. Notably, this model is coming with a modified camera island on the back. Moreover, the teaser image shows that the rectangle on the rear should be redesigned to incorporate the “2077” for a more fancy look.

Talking about the hardware, the OnePlus device bears a Qualcomm Snapdragon 865 SoC. On the other side, this smartphone boots Android 11-based OxygenOS 11. As for the storage section, the OnePlus flagship ships with 12GB of RAM and 256GB of inbuilt storage. It should also feature an extra microSD card that can expand to 256GB. Regarding the display, OnePlus 8T Cyberpunk 2077 Edition specs flaunt a 6.55-inch Fluid AMOLED with a resolution of 1080 x 2400 pixels.

Besides, it has a 20:9 ratio aspect and a gorgeous 120Hz OLED screen. In terms of the battery capacity, the OnePlus handset is coming to carry a 4500mAh juice box that supports Fast charging 65W. How about the display of this device? In detail, the OnePlus 8T Cyberpunk 2077 camera offers quad sensors on the rear setup. It includes a 48MP primary lens + 16MP ultrawide shooter + 5MP macro shooter + 2MP depth sensor, and there is a single 16MP snapper for taking selfies.